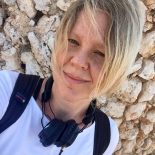 From St. Petersburg in Russia, Bakunin Brewery is on a mission to break down stereotypes. The talented and innovative brewery aims to change the way people think about beer and to expand the horizons of modern brewing culture. Let’s take a closer look at these pioneers.

The name Bakunin is probably familiar to some as the brewery has been around since 2013. It was founded by the three craft beer enthusiasts Alexander Romanenko, Yuri Mitin and Vladimir Naumkin. The trio states on their website; “we started as amateurs with a contract to make a single brew, but thanks to our enthusiasm and ambition we grew to a company that’s already released 150 different types of craft beer.” Quite a feat.

Bakunin has an impressive line-up of tasty beers and in particular imperial stouts. Dancer (12%) is a tempting imperial stout with coconut and maple syrup, brewed together with Belarus Midnight Project. Synty-Flow (12.5%) is an experimental marshmallow pastry imperial stout with milk chocolate and coffee, which sounds absolutely delicious. And also intriguing is the mysterious and bold Enzo(13%), an imperial stout with an Asian fusion of ginger, chili pepper, chocolate, mint and orange.

For more fruity options, how about Took a Wild (6%), a sour cherry farmhouse ale fermented with Saison yeast. Another bold experiment is Fibonacci (8%), an American Double IPA with powerful tropical fruits and hops. And the creative Fruits United (5%), a gooseberry and passion fruit tart milkshake ale in collaboration with Roots United, is a must to try.

The curious team has travelled extensively to beer festivals and for exchanges in Russia and abroad, resulting in interesting collaborations. For instance, when working with Brouwerij De Molen in the Netherlands came the idea for Terpenje & Trud (10.6%), labelled as a fruit barleywine-ish; ”we threw it all into a real symphony – a generous helping of raisins and dried apricots were tossed into fermentation, a first for both our breweries.” From meeting up with La Pirata in Spain came Grapefruitting (6.8%), a wildly refreshing sour IPA described as an explosive experiment. But the brewery is also making friends beyond the beer world, One example is Doppio(6.8%), a double cold brew coffee stout in collaboration with Rocket Bean Roastery in Latvia. Other partnerships include Lost + Found in the UK, Buddelship Brauerei In Germany, Boneyard Beer in the USA, and many more.

As well as brewing amazing beers, Bakunin has its own brew bars in St. Petersburg. The popular Bakunin Café & Boutique is actually where it all started back in 2013 and it still entails the true spirit of the brewery. At Rockets & Bishops, you can enjoy the flagship beers and latest releases as well as juicy burgers. And last but not least, at Kiosk Bottle Shop & Taproom the crew serves the best of Russian and global beers, with tap takeovers every month. According to the brewery; “no classics here: only hardcore.”

This article was originally published on: https://www.blefakegs-blog.de/en/brewery-profile-bakunin-brewery-russia/

This entry was posted on March 11, 2020 by Malin Norman in Beer, Blog and tagged blefakegs, breweryprofile, craftbeer, russiacraftbeer.