STRONG SUPPORT IN THE BEER COMMUNITY

The hospitality industry has been hit hard by the coronavirus. Pubs, bars, breweries and taprooms are struggling when most people have to stay at home. However, there are glimmers of positivity as brewers and pubs showcase innovative ways to help and to keep their businesses alive.

The brewing community is loyal also in times of crisis, as proven by for instance All Together. This brainchild of Other Half Brewing in Brooklyn, New York, is a worldwide beer initiative in support of the brewing industry. All Together is an open-source collaboration beer, in which any brewer can participate and make their own version, with a portion of profits going to support hospitality workers. ”We’re inviting any brewer, from any corner of the planet to participate,” state Other Half co-founders Sam, Matt and Andrew. ”The recipe is open source, the artwork is public, and the name is yours to use. The goal is to provide you with the tools to make the beer at the lowest possible cost.”

In the UK, the consumer organisation CAMRA (Campaign for Real Ale), with almost 200,000 members, has launched the Pulling Together campaign in partnership with SIBA (Society of Independent Brewers) and Crowdfunder. This new movement tries to help pubs, clubs, breweries, tap rooms and cider producers and encourages them to come up with new ways to keep their businesses going. Together with Crowdfunder, CAMRA will promote opportunities for the brewing and pubs industry to get local funding during the crisis. Via the Pay it Forward campaign, they can offer customers the option to pay for beer, meals and tickets right now, which can all be redeemed in the future. 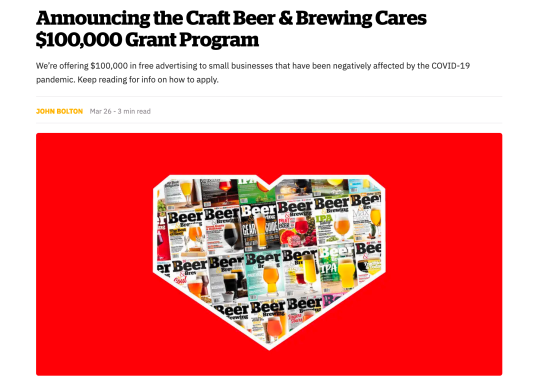 There are numerous other examples including drive-throughs, take-aways and home deliveries, such as Signature Brew’s Pub in a Box, delivered by out of work musicians. The box includes award-winning beers, beer glasses, beer mats, playlists curated by music journalists, a pub quiz, and pub snacks. And there are plenty of podcasts as well as digital pubs and meet-ups. Marston’s Beer Company has launched the Armchair Arms, a virtual pub providing weekly original content. A whopping 15,000 people watched the first live tasting with Hobgoblin’s Head Brewer Jon Tillson.

This article was originally published on: https://www.blefakegs-blog.de/en/strong-support-in-the-beer-community/

This entry was posted on April 15, 2020 by Malin Norman in Beer, Blog and tagged blefakegs, craftbeer.