Under the motto “craft beer for the people,” cult brand BrewDog is a keystone in the modern craft beer scene. Since 2007, the brewery has steadily grown its business and now operates brew sites also in Germany, Australia and the USA, and many beer bars around the world.

In addition to brewing and beer bars, BrewDog also has a distillery, a hotel, and a streaming service. Oh and in 2018, BrewDog launched the world’s first craft beer airline, bringing shareholders to the brew site in the USA. On the website, founders James Watt and Martin Dickie explain their initial idea; “Our biggest mission when we set up BrewDog was to make other people as passionate about great craft beer as we are. And that is still our biggest mission today.” 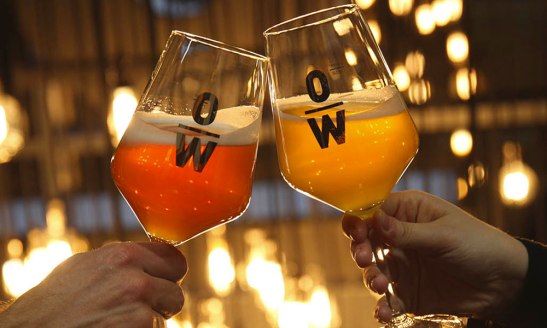 Everybody seems to have an opinion about BrewDog. Not surprising perhaps since from the start, the brewery has been somewhat controversial and received both praise and criticism. The founders early on opted for provocative marketing, for instance driving down Camden High Street in a tank to announce their new bar in London and projecting themselves naked onto the façade of the Houses of Parliament. The “beer for girls” campaign with the Punk IPA repackaged in a pink bottle to highlight gender pay inequality was heavily criticised though, despite its good intentions.

Regardless of marketing stunts and controversy, BrewDog actually knows a lot about beer. Martin is a fully qualified master brewer and some years ago, James became Europe’s first Master Cicerone, a title achieved by only a few people in the world. And their beers have won a number of awards; Hardcore IPA has won gold at the World Beer Cup, and Punk IPA, Cocoa Psycho, 5Am Saint and Libertine Black Ale have all been recognized at the World Beer Awards, just to name a few. These are not precious brewers though, trying to keep their secrets to themselves, as back in 2016 BrewDog gave away detailed recipes to every beer the brewery had made.

BrewDog might be more mainstream than it sets out to be, still marketing itself as “punk” although now a successful global business, however there are still some exciting developments. Most notably, BrewDog is big on alcohol-free beer and in January this year, they opened the world’s first alcohol-free beer bar in London, dedicated to a new way of enjoying craft beer and spirits.

Punk IPA (5.6%) is the beer that started it all. The spiky, tropical and hoppy brew was named United Kingdom’s Best IPA in the World Beer Awards. Punk AF (0.5%) is the alcohol-free version, with all the attitude and flavour but without the alcohol.

Cosmic Crush Raspberry (4.5%) is a sour ale fermented with wild yeast and raspberries and aged on red wine barrels. BrewDog’s range OverWorks, which is dedicated to wild yeasts and alternative flora, also includes for example Sour City, a sour IPA.

Roaster Coaster (9%) is a new collaboration between BrewDog and Evil Twin Brewing, released this spring. This is a decadent and smooth imperial coffee stout in a can, with pronounced coffee notes, delicious chocolate and vanilla.

This article was originally published on: https://www.blefakegs-blog.de/en/brewery-profile-brewdog-uk/